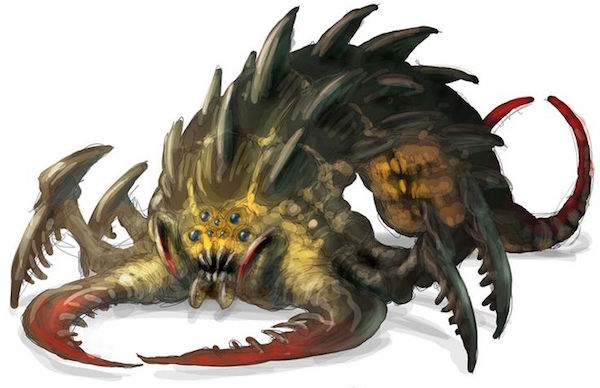 A Saldion is a parasitic creature from beyond the Outer Gates. As such it is considered an Outsider. The creature possesses two pairs of powerful, unbreakable pincers, one near it’s mouth, the other at it’s tail.

The Saldion is often used as a form of living shackle, by outsiders against those they wish to imprison.

The Saldion’s pincers acts a form of handcuffs, with the body taking the place of the chain. The creatures parasitic nature is two fold, it can absorb the strength of those it entraps, making it as strong or stronger than it’s prisoner. This makes escape without outside assistance impossible. Additionally, it feeds off the aura and willpower of the individual it entraps, weakening them over time, but also interrupting any attempts at thaumaturgy.

The creature also establishes a empathic bond with those it touches, allowing it to directly manipulate the victims emotions, making it more compliant or punishing it with agony or misery as desired.

The creature is exceptionally cruel, and if it kills its victim, it will lay eggs in it’s corpse. these eggs incubate quickly forming a “spawn” of the Saldion, which contains hundreds of immature versions of the parent.

They prefer to entrap intelligent creatures over animals, but in times of need, will overtake a lessor lifeforms for the purpose of further it’s unfathomable agenda.

Creatures of the Unknown, Index