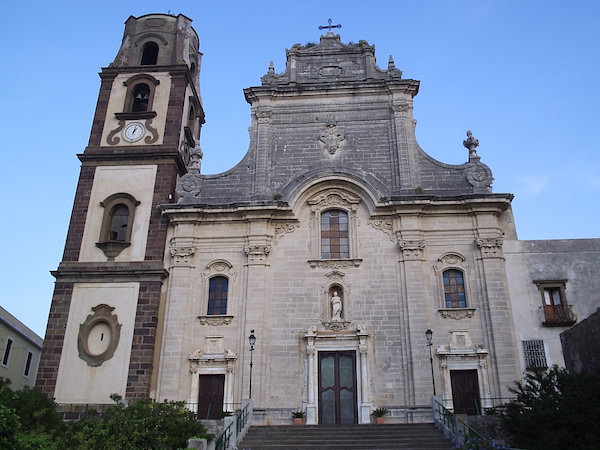 Lipari Cathedral (Italian: Basilica concattedrale di San Bartolomeo di Lipari; Duomo di Lipari) is a Roman Catholic cathedral in Lipari in the Province of Messina, Sicily, dedicated to Saint Bartholomew. Formerly the episcopal seat of the diocese of Lipari, it has been since 1986 a co-cathedral in the Archdiocese of Messina-Lipari-Santa Lucia del Mela.

The church is located in the heart of the citadel with its front facing northwest, at the top of steps leading to the lower city. It is the oldest and largest church in Lipari. It belongs to the Archdiocese of Messina-Lipari-Santa Lucia del Mela, the vicariate of Lipari under the patronage of Bartholomew, the archpriestship of Lipari and the parish of San Bartolomeo.

The conversion of the inhabitants of Lipari dates to the middle of the 3rd century AD, from which point a place of prayer has existed on the island. The first cathedral was built in the heart of the acropolis, where a Greek temple had probably existed in the classical period, but it was destroyed by the Arabs in 838.

The original centre of the city is marked by the city walls which run around the summit of the rocky spur which separates two natural harbours and which was very exposed to external attack. The economic, commercial and mercantile centre was located near the Small Harbour (Marina Piccola), where the bishop’s seat was based for a brief time before it was transferred to the Citadel on account of frequent attacks. The fortuitous and undocumented recovery of a lead sarcophagus containing the remains of Bartholomew the Apostle allegedly dates to the time of Bishop Agathon Martyr, who interred the remains in a chapel which was initially called “San Bartolomeo extra moenia” and subsequently “Sant’ Agatone extra moenia”. In this church outside the walls, near the tomb of the Apostle was the sepulchre of Agathon and his successors. Repeated attacks on this area, which accompanied the decline of Roman power in the Mediterranean, led to the construction of a church in a more secure location. The new cathedral was built over the foundations of a pre-existing Greek temple within the fortified upper citadel. The cathedral was destroyed between 836 and 837, when the archipelago was attacked by the army of al-Fadl ibn Yaqub and then by Abu’l-Aghlab Ibrahim ibn Abdallah ibn al-Aghlab, cousin of the Emir Ziyadat Allah. These attacks induced the Lombard Sicard of Benevento to take the relics of Bartholomew away to Benevento for safekeeping.

Reconstruction came only under Roger I of Sicily. The pretext for the invasion and occupation of the island lay in a request for aid by the Emir of Syracuse who was at war with the Emir of Castrogiovanni, but it proved to be the first step in the Norman conquest of Sicily. The return of Catholic control spurred the construction of a series of splendid Norman cathedrals in Sicily, subsequently renovated and repaired as a result of later events (mostly earthquakes). When the Normans settled on the island they found only a few villages of Greek speaking inhabitants in the interior. In 1083, Count Roger I invited the Benedictine monks who were well-fitted for the serenity and security of the place, and built a monastery near the castle for them. The Abbot Ambrogio and his Benedictines built the church and its neighbouring monastery in Lipari, and another pair in Patti. Pope Urban II approved the erection of the monastery and allowed Abbot Ambrogio to finance it with the tithe from Patti. In 1094 the abbey received half the property of the fief of Naso.

On 24 September 1131, Ugone, Archbishop of Messina, promoted the two monasteries of Patti and Lipari to a bishopric, in accordance with a papal bull of Antipope Anacletus II, on account of the large amount of tribute assigned to them by Count Roger. In the same year he consecrated the abbot Giovanni Pergana as Bishop. The official recognition of the diocese by the Holy See followed in 1157. In 1399 Pope Boniface IX (Pietro Tomasello-Cybo), split Lipari and Patti into two separate dioceses, with the consent of Martin I of Sicily, on account of the distance and difficulty of the sea crossing between them. Next to the single naved church, the monastery developed around the cloisters, the first Latin-Norman style cloisters in Sicily. Three of the four original ambulatories were recently brought to light, the fourth has been incorporated into the cathedral and is now its right nave.

The building was expanded between 1450 and 1515 with an artistic trussed wooden ceiling, but was burnt in July 1544 after an attack by the Ottoman corsair Hayreddin Barbarossa. In 1516 Charles V inherited an array of Spanish titles including naples, Sardinia and Sicily and led a campaign against Barbarossa, who retreated to Africa in 1535. After that, reconstruction work began in Lipari: fortifications of the citadel were improved, the cathedral was rebuilt with barrel vaults as a living symbol of the Islanders’ Christian faith.

In the course of the eighteenth century frescos with biblical scenes were painted on the vaults. In 1728, the silver statue of the patron Bartholomew was created, as well as the wooden altar to the left of the apse, in thanksgiving for his protection during the 1693 Sicily earthquake, in which Lipari was unscathed. Between 1755 and the end of the century, work was begun on the campanile. In 1772 the cathedral was expanded with two side naves. The right side nave incorporated the north ambulatory of the cloisters. Work also began on the facade of pale Vesuvian stone in 1772, intended to give a delicate contrast and sense of dynamic harmony with the interior of the duomo. In the last decades of the eighteenth century, marble altars decorated with paintings by Antonio Mercurio were added. In 1859 the cathedral was struck by lightening, destroying the gable of the facade and the causing some vaults to collapse. Repair work began immediately and was completed in 1861. The lost ceiling paintings have never been restored.

From its foundation, the cathedral had served as the sole parish church for the entire archipelago. Monsignor Angelo Paino streamlined the pastoral system of all the subordinate churches and secured a decree on 28 October 1910 which instituted the first sixteen autonomous parishes in the diocese, one of which was that of the cathedral.

The thumbs of St Bartholomew: After Barbarossa sacked the church in 1544, the sacred relics were taken away to Asia Minor. A Spanish merchant acquired them and returned them to Lipari. “Il Vascello” (“the vessel”), or in the local dialect (“U Vascidduzzu”), is a masterpiece of silverwork by Perricone-Marano of Palermo containing 30 kg of silver and 2 kg of gold. According to the oral tradition, this commemorates in occasion after a terrible famine in 1672, when Lipari was struck by a storm, and French vessel agreed to bring some grain and donate the load to the islanders for free. The archbishop Angelo Paino commissioned the reproduction of the providential vessel in honour of the event two centuries later. Inside it is a fragment of St Bartholomew’s robe.

In 1936, Members from the Vatican City SAVE Office took shelter here during a battle with Outsiders, originating from a rift at the nearby castle.