“The children of Eve are to blame for our fall; for it was for the sole purpose of tempting us from heaven that the Almighty created them. Their beauty is their weapon and we must destroy them before they render us so much wormwood. In this way can we regain our rightful place in Heaven”
– Sonnellion

Sonnellion is most commonly known as the scourge of women. He has, over the centuries, come to the conclusion that women were the traps that the Almighty set before the Watchers to guarantee their fall from grace. He is bitter and violent towards their kind and he has often taken it upon himself to cause the violent death of women.

It is known that Sonnellion was responsible for several attacks against women. He is cited as one of the demons responsible for the possession of the 16th-century Nun, sister Louise Capeau. He is also reputed to have been the direct cause of at least four separate serial murder sprees against women, the latest of which took place in 1914, in London England.

It became clear knowledge that Sonnellion had possessed a private detective named J.H. Bachelor in London during the 1870s. In this guise he undertook the infamous “Jack the Ripper” Murders. His reign of terror ended mysteriously and it was believed that it was around this time that he inhabited Sanja, future Knight of the Cross. What is clear is that this caused the mysterious disappearance of the Ripper.

That would have been the end of his reign, if Ornias had not freed him from his prison in 1913. In 1914, a ripper-style series of murders implicated a member of the London SAVE Office, Doctor John Abernathy. It was during this investigation that many of Sonnellion’s abilities were first recorded.

Apparently only a woman can kill him, although it is unclear whether a specific sort of woman or weapon is required. Sonnellion is very violent, and as such leaves a large swath of pain and misery wherever he goes. In almost every case, he seems to choose women as his victims, and it is rare that there are men involved in his murder sprees. In the original Ripper case, Sonnellion actually chose to infiltrate the group investigating his activities, indicating a predisposition to staying close to those that he feels are worthy opponents. In the 1914 case, he once again was seen to place himself close to the investigation to allow him to keep close track of the developments of the case.

Besides the obvious trail of brutal murders marking his presence, Sonnellion’s proximity also seems to stir up ghostly creatures, such as restless spirits, poltergeists and similar. It is believed that he somehow draws power from their discomfort and as such they are forced into action as a result of their tortures. This has the added affect of creating an increase of secondary activity by creatures of the Unknown, increasing the difficulty of accurately identifying and dealing with Sonnellion.

He was once an Angel in the order of Thrones, meaning he is considered to be one of the more powerful Fallen Angels within the ranks of the Denarii. It is generally believed that a woman can safely handle his coin, as he cannot possess any spiritual power over them. This is not confirmed. If this proves to be the case, then Sonnellion is unique in this regard. 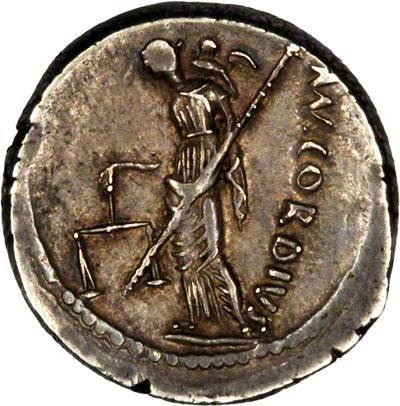