As a daughter of one of the most prominent of Europe’s Elite, Liberty was exposed to many of the finer things that life had to offer. This includes exposure to art, literature, society and access to all the finest European Tutors. Born in England, She lived there only until age three, when her father took control of the family’s Paris Banking operations. Their relocation to Paris, in 1911, would expose her to the social difficulties of war, during the World War I years.

With the outbreak of hostilities and the advent of the Great War, the de Rotheschild family in Paris moved to a country chateau in Normandy, where they remained for the duration of the conflict. As a result, those years were relatively tranquil compared to the experiences of the remainder of the company. Because of their influence, power and wealth, the de Rotheschild’s were effectively insulated from the very worst of the social and political aspects of the conflict.

With the renewal of peace in 1917, the family once again returned to a much-changed Paris. Private tutors and strict social order allowed Liberty to continue her personal growth unimpeded by the stresses brought about by a recovering nation. Needless to say, Liberty quickly mastered French and seemed to thrive in an academic environment fostered by her personal tutors.

Beginning in 1920, at the age of 12, Liberty began to accompany her parents on their various seasonal holidays across the continent. This habit continued until she turned 18, and as a result, by that time she was well traveled. Her travel experiences by the fall of 1926 included every European country, even Soviet Russia.

Liberty took a 2-year celebratory holiday. During this time, she traveled the globe; Visiting Australia, Southeast Asia, South America, north America and Africa. Her travels took her to some very primitive places, especially in Africa, but it also exposed her to the concepts of the true cosmopolitan lifestyle. Her experiences gave her ample time to determine the course of her future and in the summer of 1928, she settled into a course of study that would shape her future.

In the fall of 1928, Liberty was accepted into the limited women’s courses at the prestigious, Istituto Centrale per il Restauro e la Conservazione del Patrimonio Archivistico e Librario, Rome (Central Institute for the Restoration and Conservation of the Heritage Archives and Library or ICRCPAL.) While not the first woman to participate in the course, Liberty was the most accomplished. Her studies excelled and her extensive travel experience greatly aided in her artistic and cultural studies at the institute.

Despite her excellent performance, or perhaps because of it, Liberty decided to transfer her studies to the equally prestigious Institut National de Patrimoine (National Heritage Institute) in Paris in 1931. There she began specializing in Documentation authentication and conservation. Her studies excelled, but in addition to her studies, liberty became to take in more than the social lifestyle of Paris. She quickly adopted the “Joi de Vivre” of here favorite city; frequenting jazz dance clubs, coffee houses and bohemian poetry societies. This led her to become entangled with the Naturalist or new era movements taking hold throughout the country. These macabre groups would explore cemeteries; conduct séances and experiment with fortunetelling and ghost hunting. While Liberty was really interested more for the thrill and the scandal than as a result of belief, she did participate in many exploratory outings into the Paris Necropolis.

It was during one such exploration that Liberty became involved in an encounter with the unknown. On a particularly cloudy evening in September, liberty and friends had set out to explore a newly discovered section of the medieval Parisian Necropolis. Following directions given by acquaintances, the small group found the difficult to locate entrance and ventured into the dank crypts. As to be expected, the crypts were filled with the remains of long-dead Christians and crusaders from a bygone era. As they delved deeper into the crypts, many of the members of the group began to feel uneasy. Despite protests, they decided to turn back. Liberty, however, determined not to be frightened by her friends decided to remain within the crypt until her curiosity was satisfied.

This decision, led her to be taken captive by a group of Occultists who were also in the crypts. Their plans were much more nefarious than Liberty’s; and it wasn’t long before the young woman realized that they were intent on sacrificing her as an offering to some dark demonic force. Her pleas for freedom fell upon deaf ears and she was brought before a desecrated altar and the ritual undertaken.

This would have been the end of Liberty, had it not been for the fact that the Paris Save office was already searching the catacombs, looking for this same group of cultists. Their investigation into a series of disappearances had uncovered the nefarious plot of the cult. The Paris group, led by Etienne Chirauld, arrived in time to intervene. The cult had managed to summon some type of demonic being, but they had not yet finalized the summoning by sacrifice.

Their quick actions prevented Liberty from becoming a victim, and collectively destroyed the cult and their plans to bring forth a creature of the unknown into this world. Liberty was driven home, with the promise that all would be explained to her the following day.

Etienne did explain. He revealed the existence of SAVE, their calling and the dangers and hazards that members faced. She attempted to share her adventure with her friends, but quickly discovered that they gave her exciting story no credence. That was the moment when Liberty realized how fragile the entire world was. How SAVE worked diligently to protect everyone from the horrors that roamed the world. She met with Etienne a second time and despite his attempts to dissuade the young woman, Liberty joined SAVE.

She underwent some training for SAVE while maintaining her studies. Her friends at the bohemian society became more distant, but this did not bother Liberty. She strove forward, working hard at her studies and enjoying more of life, now that she realized how precious it could be.

In 1933, at age 25, Liberty set aside her work with SAVE long enough to transfer back to ICRCPAL in Rome to conclude her studies. She excelled academically and in Early 1936, she graduated with a Masters in Conservation Science. She was age 28 at the time.

Her hard work was rewarded, when she applied for and was accepted to become one of the esteemed Conservators and Curators at the Musei Vaticani (Vatican Museums) It was in this capacity that she met father Martin Fletcher and decided to join his newly forming SAVE office in the Vatican. 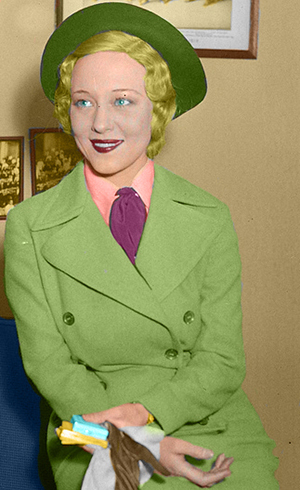